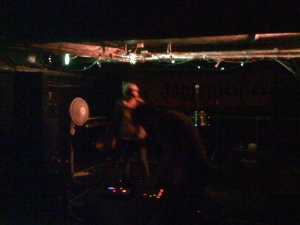 It was just another low-energy Sunday evening in the half-local, half-student Royal Park pub. Few engaged with the balding pool tables, and the karaoke machine thankfully held a dignified silence. But, in the pub’s cellar, a number of creative characters were setting about lighting up the evening’s too-early dusk with performances that were engaging and inspiring.

After a respectable local opening band (a guitar and cello pairing whose name must have disappeared into the ether), the stage was set for Ear Pwr, based in Baltimore. At odds with its common perception, from The Wire, of a metropolis populated entirely by pushers, users and bent government officials, are a loose crew of exciting poppy noisemakers. Chief among these would be band of the winter Animal Collective, but just bubbling under are Ponytail and – yep! – Ear Pwr.

While the stage may have been set for this pair, they rarely actually stood on it. Setting up their table of machinery and gubbins, Devin and Sarah opted to set the noises, beats and loops running, before dancing, meandering and staggering about the room. It was a creditable performance: there may only have been ten people in the room, but if their energy was in any way diminished, it certainly didn’t show. Main vocalist Sarah bounced around while singing her electro-nursery rhymes from their brilliant album, about beams of light, title track’s Super Animal Bros. And, err, ‘future eyes’ – though sadly not the addictively exuberant ‘Sparkly Sweater’.

Devin, when he wasn’t setting his musical plates spinning, was wrapping the microphone cord around himself, wrapping it around Sarah, providing on-and-off vocal assistance to Sarah, and writhing about on the cellar’s rather unpleasant floor. They departed after a brief, and rather thrilling, set (not only were Ear Pwr the support act, but their summer highlight album is only half an hour long), but promised to return in November. At that point, their new EP – and new drummer – should be in place.

Having never heard Greenville, North Carolina’s Future Islands (now also based in Maryland) before this evening, I was in for a scintillating surprise. After the childlike, if drug addled, glee of Ear Pwr, trepidation met the headlining trio of thick-set men with synths. By the end of the opening song, your reviewer was an enthusiastic convert.

Future Islands’ album, 2008’s Wave Like Home, is an intriguing blend of well-written synth songs and super-camp vocals. While it’s a solid album in its own right, it gives little indication as to the ferocious talent of singer Samuel Herring. Looking for all the world like Jack Black’s stunt double, he also sounds superficially like the camp-heroic Tenacious D frontman. It soon becomes clear, though, that Herring is a singular talent. He rips his own songs a new arse, a combination of Tom Waits’ gruff personality, Mike Patton’s ever-present air of pastiche, and Henry Rollins’ aggression and brilliant shape-throwing.

While self-effacing about his talking prowess, Herring makes for a charismatic frontman, winning the now-full room over with his chat and singing alike. He worked up a furious sweat early, and it’s not hard to see why: he sings hard. He reaches deep down within himself, and pulls out a level of vocal intensity not seen since Carla Bozulich brought her inimitable brand of beautiful, guttural fire and brimstone to a Leeds church last year. When he prefaces ‘Little Dreamer’ with the words ‘this was a happy story… but now it’s a sad story’, you believe him. Especially as he leaves his still-beating heart throbbing away on the floor, for all to see.

Whether the song was ‘Beach Foam’ from the album, or ‘The Happiness of Being Twice’, from this year’s ‘Feathers & Hallways’ single, Future Islands never stopped entertaining. The bassist was occasionally inspired in his playing, but both he and the synth player were essentially there to ably back Herring’s cabaret emoting.

Future Islands are currently working on their new album. Though both they and Ear Pwr give off an air of piss-take at times, the new material should be interesting, at least. If Ear Pwr can flesh out the faux-naive charm of Super Animal Brothers III, and Future Islands somehow manage to harness the power of their force-of-nature singer in the studio, the next year should belong to Baltimore.